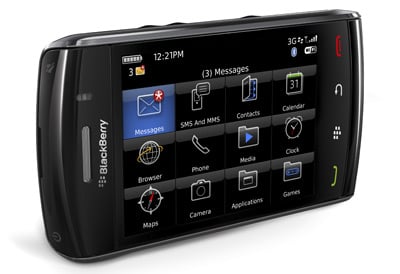 Vodafone had locked down an exclusive for the BlackBerry Storm2 9550 (and the original 9500, for that matter) across Europe, but that time is quickly coming to a close. T-Mobile has announced that they’ll be offering the Storm2 this month. O2 may also take advantage of the ending exclusivity by offering the SurePress smartphone at some point soon, although there’s no official word just yet.

The Storm2 is RIM’s second touch-based BlackBerry, which uses a signature clicking touchscreen that sharply divides its users and detractors. Otherwise, it’s roughly the same experience you’d expect from a BlackBerry; a 3.2 megapixel camera, GPS, Wi-Fi, and a 480 x 360 display round out the device. Scope out our review for a closer look.

An interesting tidbit from the announcement is that Phil Lander, T-Mobile’s account director at RIM, confirmed that they’ll have an official Twitter application shortly. We’ve been hearing quite a bit about the app, and have even heard that it’s coming this month. Here’s hoping! As for the Storm2, I wonder if the T-Mo UK arrangement will have any repercussions in the U.S. – maybe Verizon’s exclusivity will be up too, since Vodafone owns a chunk of the company, and so T-Mobile U.S. could follow in its European brother’s footsteps.