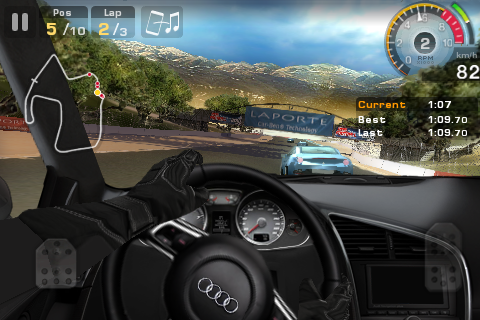 Gentlemen, start your iPhones!  Gameloft has just released its entry into the simulation racing space with ‘GT Racing Motor Academy‘ for the iPhone.  Its got 100 fully licensed vehicles across 25 real world car manufacturers, which considering this is an iPhone title is a huge feat.

GT Racing Motor Academy includes a career mode with 6-player races which can be played locally or online.  You can also test drive, buy any of the over 100 vehicles in the game, or just look at how shiny those paint jobs look. It also has full Gameloft LIVE support for you trophy seekers out there.

From the looks of it, this could be a game that Gran Turismo fans could certainly enjoy.  The App Store has a bunch of racing games, but none that can be considered a serious entry into the simulation space.  Depending on GT Racing Motor Academy’s success, I’m sure we could see more serious simulation racing titles instead of another kart racer.

NAVIGON, developers of the MobileNavigator have introduced a significant update to their feature-rich navigation app. New key features include the...