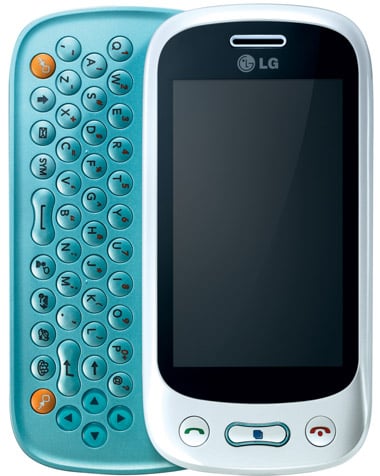 LG has announced the successor to its low-end messaging phone – KS360, which we also know as Tribe or Neon. The new device keeps the side-sliding QWERTY form factor, while priding itself with social networking features, that include integration with Facebook and Twitter.

In addition, there’s a 3-inch WQVGA touchscreen (there were no touchscreen on the KS360) as well as four-line QWERTY keypad (versus KS360’s three lines) with dedicated buttons for accessing push e-mail, the web browser and instant messaging client.

Availability wise, the LG GT350 ill go on sale in Europe from this April and will then launch in other markets around the world. It will come in four color combinations including Aqua Blue, Purple, Light Silver, and Black, some of which will be exclusive to specific carriers.

Samsung Monte S5620 Announced, All Social Network’d Up in Your Grill