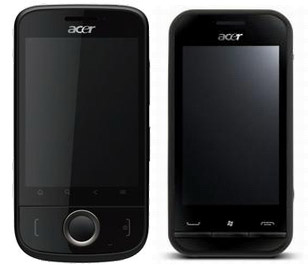 Acer is moving toward launching new devices at the Mobile World Congress next week. We don’t have the full list at the moment, but we do think to know two of the phones that will be unveiled at the event, thanks to the Bluetooth SIG (E100 and P300 links).

The first one is the Android-powered Acer E110 (pictured on the left) with specs that include HSDPA connectivity, A-GPS, Bluetooth, touchscreen with four soft keys below.

The other device is the P300, which relies on Windows Mobile. Specs include HSPA connectivity, WiFi and Bluetooth.

And that’s about all we have at the moment. Plus, we do know that both devices were made by Chi Mei Communication Systems, which is a part of Foxconn. As soon as we hear something new, you’ll be the first to know. Stay tuned. 😉

Who says Xperia X10 is the only Sony Ericsson handset that can run Android. The original WinMo device, Xperia X1,...