There is a debate as to how companies should define their metrics, without including a lot of hype. The definition of an “active user” that Facebook has, is not the same that Google, or even Nokia have. For Opera, an active user of Opera Mini is one who uses the application at least once a month. It’s crude, and while I wouldn’t call that active, it is what it is and there is nothing I can do to change that. Today Opera has announced that they’ve crossed a new threshold, that during January 2010 they had over 50 million active users using Opera Mini. It’s a testament to how awesome that little application is, and how successful Opera has been at securing operator deals.

Just look at the chart below and try to not be impressed. It’s hard. That’s a 150% increase in the number of users from January 2009 to January 2010. Crossing my fingers that Opera release a new beta of Opera Mini 5 that supports Android. I’ve been a Nexus One owner for the past 2 days, but that’s a whole different article.

These numbers could easily double if Apple approves Opera Mini for the iPhone, but that’s highly unlikely. 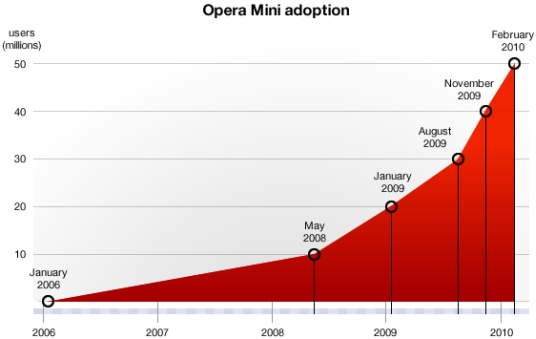