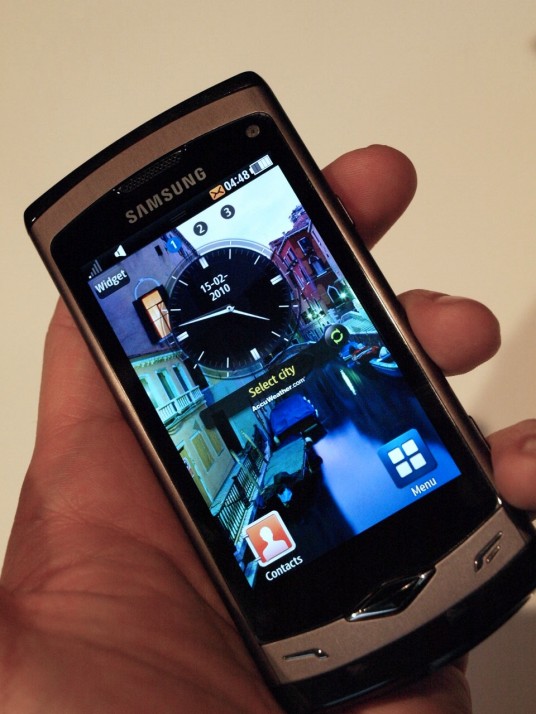 The Samsung Wave just ushered Samsung’s Bada OS into the smartphone segment at the smartphone maker’s press conference earlier today, and we’ve some sweet, sweet hands-on video (HD video, booyah) of the impressively-spec’d handset for your viewing pleasure. Samsung gave us a chance to play with their first smartphone powered by the Bada OS, and we came away pleasantly surprised. We didn’t think a mobile phone that runs on a smartphone OS aimed at the not-so-high-end market could leave us with anything but lackluster emotions. Being wrong isn’t always such a bad thing.

First, the hardware. The Samsung Wave is just 10.9mm thin. It’s crafted from aluminum and glossy black plastic trim, which is reminiscent of Samsung’s Ultra series handsets. In other words, it feels solid in the hand and exudes a sense of style that we just can’t fault. For a smartphone aimed at the lower-tier markets, the Wave packs some serious features: 3.3-inch Super AMOLED capacitive WVGA (800×480) touchscreen, 1Ghz processor, 5-megapixel camera (with flash), 3G data, WiFi, GPS, Bluetooth 3.0, microSD card slot and either 2GB or 8GB of onboard storage. Those specs aren’t anything to dismiss just because the Wave runs a smartphone OS that doesn’t come from Apple, Google or Microsoft.

Then, there’s the Bada OS. At first, Bada OS seemed like a pared-down smartphone OS based on Samsung’s TouchWiz UI – Samsung calls the Bada OS’s iteration TouchWiz 3.0 – and, while that’s not too far off base, we have to say that Bada OS is just as functional and easy to use as the Android OS. In fact, the Bada OS takes design cues from Android for its multi-pane homescreen and notification bar along the top edge of the display. Bada is built around a widget-based homescreen that let’s you customize your homescreen with all kinds of instant-access information. There’s also a fairly extensive menu of apps pre-loaded with Bada, which you can easily supplement through the Samsung Apps store.

As far as the overall usability and feel of the device, the Samsung Wave and Bada OS deliver a smartphone experience that brings down cost without sacrificing functionality. You can email, text message, edit video, watch YouTube, browse the web and even keep up with your social networks just as easily as on an iPhone or Android phone.

Check out our hands-on photo gallery and video below!