In a little under one hour Nokia is going to be holding a press conference. We’ll try to live blog it, tethering with so many mobile phone geeks in one room is never nice, but in case our network goes down you’ll be able to watch Nokia’s event live on Nokia’s Mobile World Congress page.

We don’t know what they’re going to announce, but if the picture I took after I picked up my press badge is right, then we’re going to see something related to Intel. 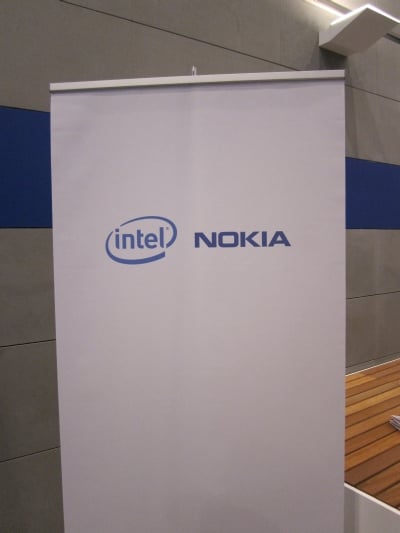 That being said, there is one thing more important, more relevant to you right now, and that’s Symbian. Your opinion of the operating system aside, it drives 4 out of every 10 smartphones shipped. Symbian officially went open source a few days ago, Symbian^3 at least, but it’s not 100% complete. Today Nokia said that they’re planning on completing Symbian^3 in Q1, and that it’ll be on devices as soon as Q3 of this year. It’ll support HDMI video out, 4G networks (there is no official 4G network technology by the way), and seamless switching between the cellular and WiFi networks. I’m sure that feature list is quite a bit longer, but they’re not going to risk making a promise they can’t keep. Check out the video below to get an idea of the type of user experiance you’ll be using by the end of this year, assuming you pick up a new Nokia device that is.