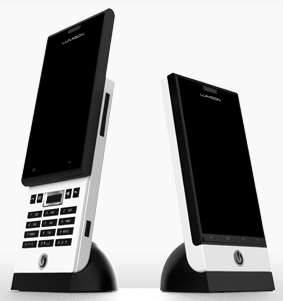 Copenhagen, Denmark-based Lumigon is joining the Android party with two phones — T1 and S1 — both of which run Lumigon’s own UI on top of Android 2.1 to “give the user even more user-friendliness.” Both devices get their power from the Freescale i.MX51 CPU, and both come with a capacitive touchscreen, A-GPS, 720p HDMI out, FM receiver and transmitter. Furthermore, each of the phones boasts some handy features such as universal remote control app, and Lumigon also promised to deliver some cool accessories – HDMI desk station for connecting phone to a TV set and Bluetooth keyboard.

The difference between the two models is in the form-factor – while T1 is an all-touchscreen device, the S1 is a slider with regular numeric keypad. The T1 will be available in early Q2, whereas the S1 will hit the market later in second quarter.

Finally, Lumigon promised to launch another phone this year – E1, which they say will be “one of the most fascinating phones ever produced.” It will feature a “unique navigation system and a shape never experienced in mobile phones.” I like their thinking when it comes to accessories and boy do I want to believe… 😉