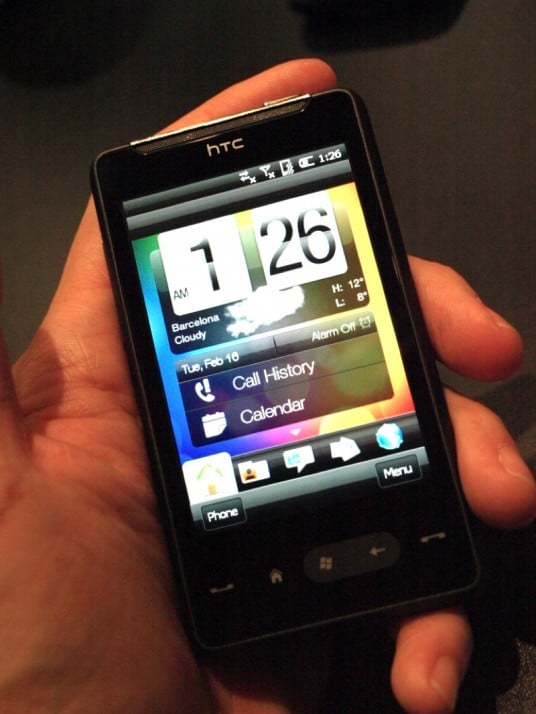 The just announced HTC HD Mini’s purpose is pretty self-explanatory – it’s the HTC HD2‘s brother-from-another-mother that HTC says gives you “big experience in a compact form-factor.” The HD Mini is a lot like the HD2, just, well, mini-sized. It’s not as powerful, but it’s just as capable when it comes to the media experience. And, similar to the HTC Legend, the HD Mini employs a novel construction technique that gives the frame a clean, uncluttered look.

Unlike the HD2, the HD Mini feels perfect in the hand. We’ve had nothing but great things to say about the HD2, but if the beast of a smartphone has one fault, it’s that it’s big and a bit unwieldy. Don’t get us wrong, we love the HD2, but we have sizable hands. If you need something smaller, the HD Mini fits the bill quite nicely. Unfortunately, it comes with a slower processor and sans a camera flash. To be fair, though, you’re unlikely to ever notice the slower processor, since the display is smaller and isn’t as demanding as the HD2’s 4.3-inch capacitive touchscreen. The flash, on the other hand, will probably be missed by anyone spoiled on an HD2.

The hardware specs include a 3.2-inch AMOLED capacitive touchscreen, 5-megapixel camera, 3G data, WiFi, GPS, 3.5mm headphone jack, microSD card slot, capacitive soft keys and that surprise yellow finish underneath the battery cover. The front face of the HD Mini is essentially a single piece of glass that gives the HD Mini a design aesthetic more in line with what HTC has been pushing out of late .

On the software side of things, the HD Mini’s Windows Mobile 6.5.3 OS is a refreshing update to the HD2’s WM6.5 underpinnings. It’s not a radical change, but it’s enough of an evolutionary upgrade to make a difference. Of course, TouchFLO 3D hides Windows Mobile’s faults pretty well, and makes the HD Mini competitive against Android and iPhone.

So, what is this phone lingerie we’re talking about? Well, open the battery cover and you’re treated to a frame finished in bright yellow. Only a select few will ever get to see your HD2’s embellishments, much like your girlfriend’s lingerie – hence, phone lingerie! HTC crafted the phone so that only four screws are needed – one on each corner – to hold the entire handset together, and they wanted to show off the HD Mini sleek underbelly with a colored frame that stands out and demands attention. Well done, we say.

Sagem Wireless launched a new device for the over 50's market - Cosyphone. As you can presume for yourself, it's...