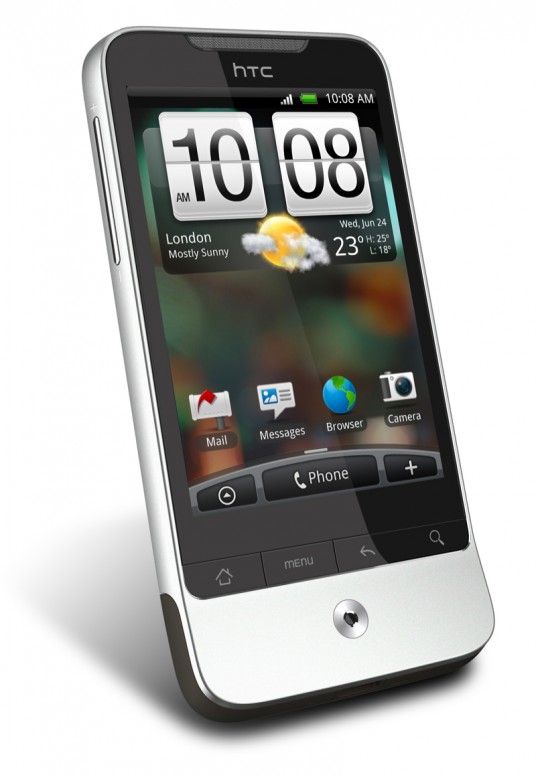 HTC is taking full advantage of the global audience here at Mobile World Congress with the launch of their next-generation smartphones, like the HTC Legend. Today, HTC announced the HTC Legend as the successor to its wildly popular HTC Hero. The Legend takes the Hero’s recipe for Android greatness and spices it up a bit with softer, more refined exterior design that replaces harsh angles with curves. It’s aluminum unibody is crafted from a single piece of aluminum that lends to a design aesthetic that would make an Apple MacBook Pro a little jealous, complete with the subtle “chin” that we’ve come to love.

The Legend makes a lot of subtle changes to the Hero’s design that really goes a long way to make the Legend feel like a whole new smartphone. Gone is the trackball, replaced by an optical trackpad that won’t wear out or gather dirt and dust. There’s a faster processor, clocked at 600Mhz, to run its Android 2.1 OS (Eclair). The entire package is crafted using a new slot-assembly construction method that allows the case to be milled from a single piece of aluminum. The Legend is seriously tough – HTC’s CMO John Wong slammed an HTC Legend against a wall with a resounding thud to demonstrate the Legend’s hardened unibody construction.

The Legend also sports HTC’s new Sense UI. The new Sense homescreen features a new multitouch gesture control called “Leap” that makes it easy to hop from one homescreen pane to the next without having to scroll through every other pane. It works with a simple multitouch pinch gesture on the homescreen, which instantly arranges all your homescreen panes into a grid. It’s works a lot like the Mac OS X’s Expose feature. Once in the exploded-pane view, you just tap the pane you’d like to jump to and you’re good to go! Turns out, that leaked video showing the HTC Sense homescreen multitouch pinch gesture was spot on.

We’re looking forward to a Q2 2010 launch of the HTC Legend in Asia and Europe. Pricing is not yet known. Stay tuned for our hands-on video and pics!