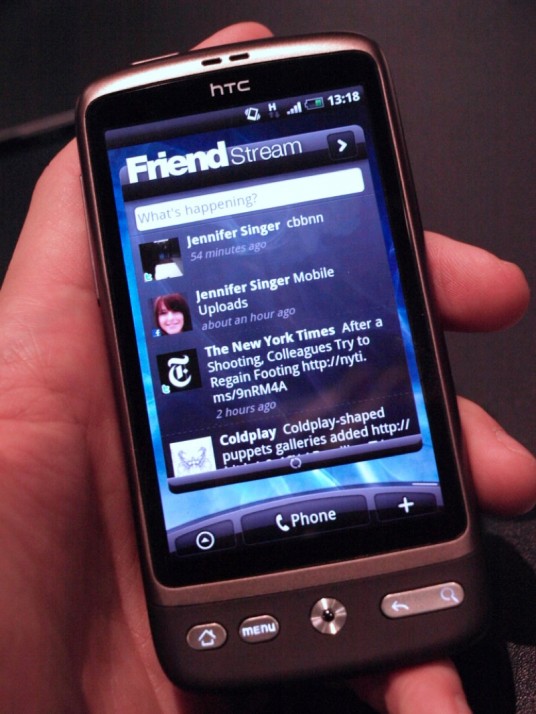 If you like the Nexus One and it’s impressive spec-sheet, you’re going to love the HTC Desire. Just as expected, HTC dropped the Bravo on us today under the new “Desire” moniker, and it’s every bit the high-end Android phone that we expected to come from HTC. Not only does the HTC Desire pack in all the latest and greatest technology available to smartphones today, it also wields a new version of the HTC Sense UI that makes it even more flexible and usable than its already amazing predecessor. If you want the Nexus One, but need to have HTC’s customized Android homescreen, you’re going to want to pick up a Desire – that is, after you move to Europe or Asia.

Strangely, HTC’s most powerful new handset is actually the least interesting when cast in the light of the HTC Legend and the HD Mini. It doesn’t really benefit from any of HTC’s innovative new construction techniques. It doesn’t boast any of the eye-candy embellishments. What it does have, though, is a unique feature-set that gives it a serious hand up on the competition. The Desire features the same Android 2.1 OS, 1Ghz Snapdragon processor, 3.7-inch AMOLED touchscreen, 5-megapixel camera (with LED flash), 3G data connectivity, WiFi, GPS, microSD card slot, and 3.5mm headphone jack as its spiritual predecessor, the Google Nexus One. It takes that impressive spec-sheet and adds a lot of HTC customizations that take the phone to the next level.

The HTC Desire uses the revamped HTC Sense UI with the “Leap” feature that allows you to quickly jump between Android homescreen panes. Simply pinch the screen (multitouch style) and the homescreen zooms out to a grid displaying all your homescreen panes. Then, you tap a particular pane and you’re magically whisked to the pane of choice, without having to swipe through all the other panes that might be in the way.

You also get a new in-line word definition tool that automatically looks up the definitions of words, related Wikipedia entries, and can even translate paragraphs through Google Translate – all on the fly, and without having to switch applications. And, when you’re done looking up word definitions, you can watch embeded Flash videos through Flash Player 10.1. Or, to be more specific, you can use Flash Player 10.1 once it becomes available for the Desire – until then, you’ll have to make do with Flash Lite.

As expected, the Desire feels just as solid and perfectly weighted in the hand as the Google Nexus One. It’s not the smallest phone, but we’d go as far as saying that the size and weight is a good compromise, considering the large 3.7-inch touchscreen. If you want small, you don’t want the Desire (please see the HD Mini). If you want striking design and beautiful brawniness, you’ll want an HTC Legend.

Dusan Will Simon (left), Yoeau (right) We're tired, we're crunching video, we're writing until our fingers are falling off. All...