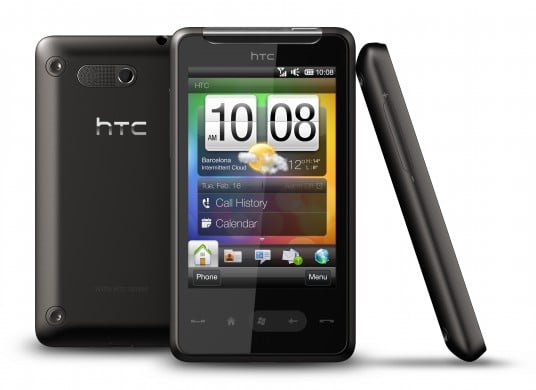 If you like what the HTC HD2 has to offer, but you just can’t deal with the extra heft that the 4.3-inch capacitive touchscreen brings to the table, HTC has something just for you. The company that brought us the single most impressive Windows Phone on the planet (for now) has just unveiled the HD2’s little brother, appropriately named the HTC HD Mini. It packs just as much of a punch as the HD2, but the HD Mini trades the huge touchscreen for a smaller, more compact 3.2-inch capacitive touchscreen display throwing out 320×480 (HVGA) pixels. HTC says it’s all about getting a “big experience in a compact form-factor.”

Not everyone has room in their pockets for the HD2’s massive display. Despite being thinner than a pencil, the HD2 just isn’t suited for smaller pockets. The HD Mini, on the other hand, measures in at a very pocket-friendly 103.8 X 57.7 X 11.7 mm. Just like it’s bigger brother, the HD2, the HD Mini runs on Windows Mobile 6.5 OS, infused with HTC’s Sense UI and sports a 5-megapixel camera, GPS, WiFi, microSD card slot, 3G data connectivity, 3.5mm headphone jack, and a slew of sensors (ambient light, accelerometer, proximity sensor).

Unlike the HD2, though, the HD Mini is powered by a slightly slower CPU, clocked at 600Mhz, backed up by 384MB RAM and 512MB ROM. The HD Mini sports capacitive soft keys that make it look more HTC-ish. In fact, the entire front face of the device is one giant piece of glass. Going back to how HTC created new construction methods, the HD Mini was designed by HTC’s design firm One & Co, and employs new assembly methods to give the phone a more solid build that complements its stylish exterior. And, there’s a little surprise under the battery cover – a bright yellow finish reserved for only the most privileged eyes (like lingerie, but way more techie).

If you need the WVGA display, the 1Ghz Snapdragon processor, and the ooh’s and aah’s you’ll invariably get with an HD2 in your hand, you’re not going to want an HD Mini. But, if you want much of the same feature set as the HD2 but need a smaller form-factor, the HD Mini fits the bill quite nicely. Expect to see the HD Mini going live in Asia and Europe in April. Pricing is still not known.

Sony Ericsson has chosen Discretix' Multi-Scheme DRM Client to "protect distribution and consumption of multimedia content" for its PlayNow services....