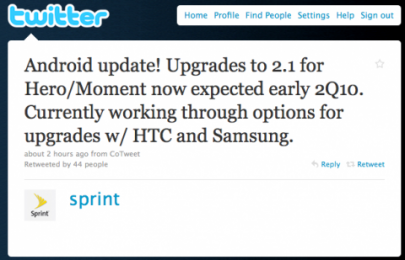 Android updates on the brain, much? Following on Motorola’s Android 2.1 OS update timetable, Sprint has revealed  that the long-awaited Android 2.1 update would soon be arriving for Samsung Moment and HTC Hero users. Both of these devices are still stuck on Android 1.5, which is getting outdated rather quickly.  The update will be expected early in the second quarter of this year, so customers still have some time to wait.

It would be expected that the Hero would not be updated until HTC went live with their Sense UI running on top of Android 2.1, which we’ve recently seen running on the Desire, and Legend. It’s more puzzling that the Moment has yet to receive an update, even to Android 1.6 when it is running stock  software, give or take a couple Sprint-made applications. It is nice to see manufacturers, like Motorola, and now carriers like Sprint are becoming more vocal about updates, instead of keeping quiet and frustrating in the dark customers. All that matters is that it is happening, and that users are beginning to see a light at the end of the 1.5 tunnel.

Bluetooth Support Added to ‘The Missing Sync’ for Android

A quick update here for Android device users currently packing 'The Missing Sync' to help sync all files and contacts....