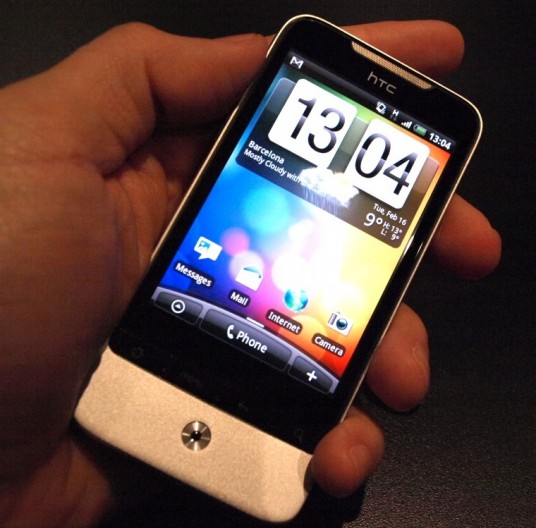 HTC today unveiled their new HTC Legend as the first Android phone to take advantage of the company’s innovative slot-assembly technique as well as a unibody aluminum casing that also serves as the frame. The Legend’s body is milled from a single piece of solid aluminum, making it one of the most striking mobile phone designs we’ve ever come across. So, naturally, we just had to get some one-on-one time with the new Android super star. In one word, the HTC Legend is simply “bad,” Michael Jackson bad.

What makes the HTC Legend so badass? Let’s start with the aluminum unibody that would make a MacBook Pro a little jealous. There’s no denying that Apple’s aluminum notebooks are among, if not the, most beautiful laptops on market. Imagine holding an Android smartphone that exudes that same design appeal. It looks as amazing as it feels in the hand – elegant and sturdy, refined yet brawny.

But, the Legend’s beauty goes more than just skin deep. The metal case acts as a sort of exoskeleton that doubles as the Legend’s frame, allowing all the internal components to slide into the hollow aluminum case. HTC calls this manufacturing technique “slot assembly.” The aluminum body is so strong that HTC has no problems repeatedly slamming the Legend against a wall or table with enough force to make us cringe. We don’t know if HTC’s already tried to do so, but we’d be trying to patent this new manufacturing technique if we were HTC.

Then there’s the Legend’s 3.2-inch AMOLED capacitive touchscreen that outshines traditional backlit displays with crisp, vivid colors. Add to that a sprinkling of smartphone goodies like the 5-megapixel camera, 3G data, WiFi, GPS, and Android 2.1 OS (complete with the updated Sense UI), and you’ve got the makings of this year’s most covetous Android smartphone.

HTC has also unveiled an updated version of their Sense user interface that includes, among other things, a new homescreen panel called “FriendStream.” It’s like a social networking hub that puts you at the center of your online world, continuously updating you on every little detail of your friends’ mundane lives. This new Sense UI even supports a multitouch pinch gesture that brings all of the Android homescreen into grid view, making it easy to hop between panels without having to swipe through multiple panels.

In the end, the Legend’s display is sublime, the casing is without parallel, and the new Sense UI takes an already impressive (you could even say class-leading) Android homescreen and makes it even better. Too bad the Legend won’t be coming to the US in the near future. Asia, Europe, count your lucky stars, starting in Q2.