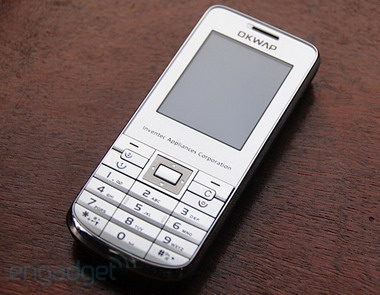 This one’s for emerging markets and super eco-minded folks, who are willing to exchange features for the green label. China’s ZTE and OKWAP unveiled a trio of solar-powered devices at the Mobile World Congress and they intend to sell them all around developing countries of the world.

ZTE showed the S316, a super-simple candybar with color display and torch; along with the “not only for mobile phones” S101 charger that also comes with a built-in flashlight. The third device is the OKWAP GS109 (pictured above), which boasts dual-SIM card support, color screen, Bluetooth 2.1, video camera, microSD slot and music player — and is certainly a star in its category. All three devices rely on Intivations SunBoost solar conversion technology that ensures charging goes uninterrupted even in cloudy conditions.

ZTE’s stuff will be available in April, whereas the GS109 will start selling next month…

Garmin and ASUS’ joint nüvifone family is expanding rapidly, and at Mobile World Congress, we got a chance to check...