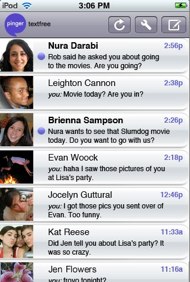 Pinger may not be the iPhone app developer we covered extensively in the past, but they’re laughing their way to the bank as I write this. The company’s 14 apps are all listed in the top 100 iPhone apps in the AppStore. And now they’ve announced that more than 1 billion text messages have been sent with their Textfree app within 9 month!

The billion texts sent came from about 5 million people who’ve downloaded the app. Both the number of downloads and especially the number of texts sent impress, and once again prove there’s money to be made out of mobile apps.

Finally in case you don’t know about Textfree, it allows anyone to send up to 15 text messages a day for free. The premium version, available for $5.99 a year, removes that barrier and includes unlimited SMS.