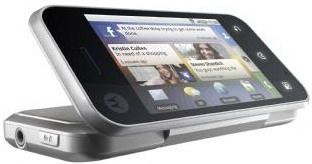 AT&T has officially announced its first Android device and it’s the Motorola BACKFLIP, which is set to hit the carrier’s offering on March 7th.

As you probably know, the BACKFLIP has that awkward reverse flip design and comes with MOTO’s social networking-enabled MOTOBLUR UI that allows users to keep up with their friends’ activities right from the device’s homescreen. In addition, the specs include a 3.1-inch HVGA touchscreen, 7.2Mbps HSDPA, WiFi, 5-megapixel camera with flash, GPS, Bluetooth and so on.

AT&T will sell the BACKFLIP for $99.99 after $100 mail-in rebate and with a two-year contract. Along with the phone purchase, customers also get access to AT&T’s 20,000 hotspots around the U.S.

AdWhirl brings its advertising mediation solution to the Android platform

AdWhirl, which as you may know is owned by acquired-by-Google AdMob is "going Android." They are launching the completely open-source...