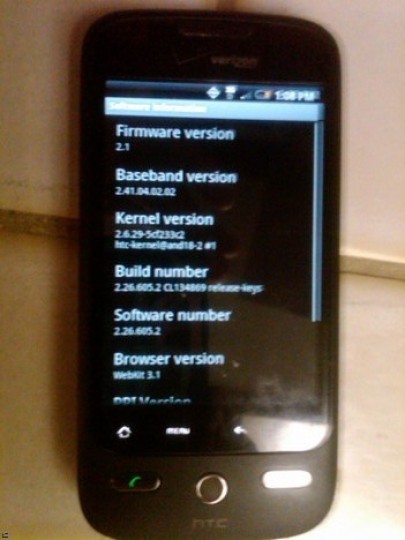 An over-the-air (OTA) update has been dropping into the hands of a few unsuspecting HTC Droid Eris users.  Reports say that the update process is not going over so well. If this is the beginning of Verizon’s Android OS 2.1 rollout, then it looks like its off to a rocky start.

Some recipients who have received the update  have said it was successful, and their phone now says “2.1” under the “Firmware Version” in the settings (above). Some have not been so lucky. One report claims that they’d attempted to update the phone twice to no avail at all. There are also reports that the update came, went through successfully, and that they are now on Android 2.1, with no Sense UI. Now whether if this is some sort of glitch, or accidental update sent out, we’re not sure, but something is not right. There seems to be some inconsistency as to what update actually does.

A majority of those who has received the update, despite success of the update, can agree that the attempt has erased everything off of the device. As a regular at the XDA forums, I’ve had to wipe my device plenty of times and set it up for a new ROM. For a person who may be less tech-savvy, or just uninterested in anything more than just having a smartphone that does its job may be somewhat frustrated if they have just lost all of their applications and what not. Sure you can re-download your applications and put everything back into their place, but what of the texts, and all of the application data that was lost? Frankly, I’d be pissed.

In the long run, however, it does seem like a small sacrifice for a much-needed update. Hopefully Big Red will get it right next time.

Sprint may not yet have a truly nationwide WiMAX network up and running in the US, but they're making preparations...