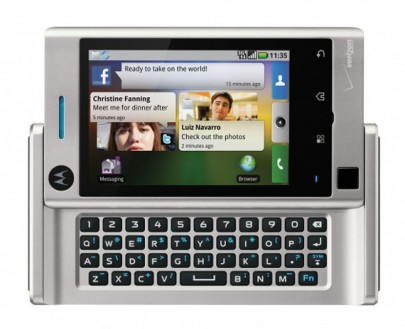 So Megan Fox didn’t sell you on the Devour, eh?  Oh, neither did the hands on video?  Well, what about the news that Best Buy Mobile will be offering the MotoBlur device for only $99? Do we have your attention yet?

The Devour has been available for preorder for a week now, and since the announcement, there had been no announcement of pricing. The assumed pricing of the device was going around $150, but it seems that Best Buy has slashed $50 off, making it easier on the eyes. Best Buy is a great place to buy mobile phones, as they usually get rid of  the dreaded mail-in rebate, as well as provide pre orders. They recently cut  the prices of other Android phones as well, but what does that mean for the Devour?

The introductory price of $99 for the Devour is quite a good one, but Best Buy  just dropped the HTC Droid Eris to free, and the Motorola Droid to $99 dollars as well. For the Devour to successfully compete with it’s beefed up brother, Motorola needs to push MotoBlur harder, distinguishing it from the Droid. The Devour (61.0 x 115.5 x 15.4mm) is slightly bigger in some areas than the Droid (60.0 x 115.80 x 13.70mm), which makes one wonder if MotoBlur is worth all the fuss. I say no, but I’m not completely addicted to social networking. I’m  also not really in love with the look of MotoBlur, it looks like it was built with tweens in mind. Whether or not MotoBlur, or stock Android is for you, Best Buy has surely made your choices a little harder.

Some HTC Droid Eris users are reportedly already getting over-the-air updates to Android 2.1, so it's not surprising to see...