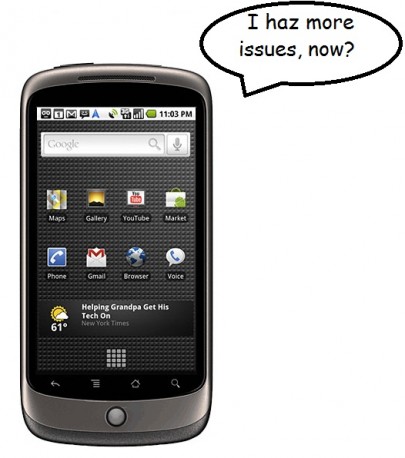 Nexus One users in the UK are having quite an annoying issue with their devices. After an update that was rolled out in late January, there have been reports that some users have been dialing emergency numbers as soon as they try to access their voicemail, or call a freephone number.

To make matters worse, a simple fix does not seem to be out there at the moment. Users reporting the  issue to Google’s customer support have been given a new voicemail number, which does not fix the problem, but gives them more of a work around to get to their voicemail. So instead of dialing ‘111’, or whatever the short number to access voicemail may be, Google is giving customers the ten digit number to directly connect to their voicemail. So far, there seems to be no fix, or work around for freephone numbers.

The Motorola Droid is one of this year's hottest Android phones, but that doesn't mean it has to come with...