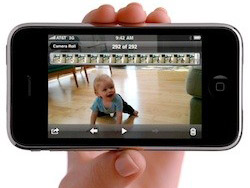 Apple has released two new iPhone ads, each one tackling an everyday situation.

In the first ad called “First Steps,” we see a mom who records her son’s first steps and then sends a video as an MMS. Then she starts a conference call with the grandparents and talk about it. At the end of the clip, mom concludes that she could never have shared all that without the iPhone, which as you may know, is not true — other platforms also support video and MMS.

The second ad is titled “On Hold” and shows a man that is put on hold. Most of us hate that situation and Apple’s marketing folks know that. So they decided to show us what else you can do while on hold. In the video, the man checks his email, pays a bill, buys Monopoly game from the AppStore and starts playing it.

In a nutshell, Apple goes for everyday phone users (not only smartphone folks) and that strategy works for them like a charm, always.

The FCC is looking to free up to 500 megahertz of spectrum for wireless broadband over the next ten years and...