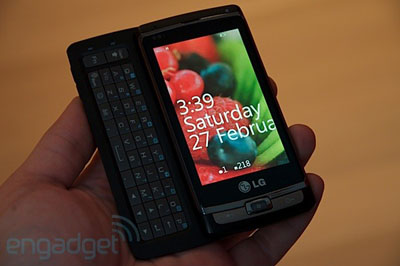 You may have read a little earlier today that LG has plans to ship its first Windows Phone 7 Series device as early as September. No exact dates have been specified, but according to a sit-down with LG Mobile in Hong Kong, Engadget was able to glean device availability sometime between September and November… Just in time for that holiday shopping season.

Today, a wonderful little leak has popped up, via Engadget yet again. Turns out that Microsoft’s Aaron Woodman brought out the LG Windows Phone 7 Series pre-production prototype at The Engadget Show. Lucky ducks.

As you can see, the device is a side slider, with a full QWERTY keyboard, and standard function keys below the ho-hum-sized display. Nothing really shocks me as amazing here… Sure would be nice to see some killer hardware for Windows Phone 7… You know, something that makes me sit up and take notice. Is that too much to ask?

If Samsung can claim their Jet is "smarter than a smartphone," so can LG for its LG Maxx LG9400 device,...