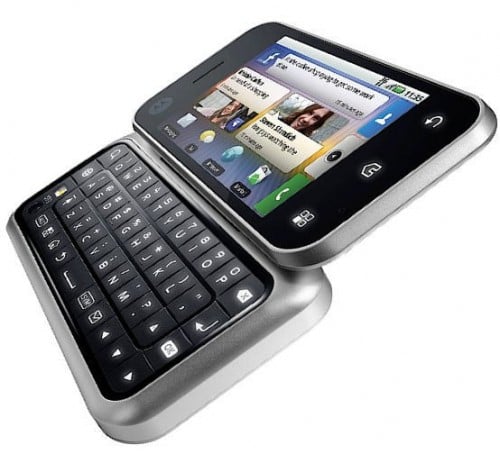 Everyone break your piggy banks, the Motorola BackFlip is coming! Or, not. AT&T has just stuck it to Google by going with Yahoo as the device’s primary search feature. Why they decided to go this route is up for debate, but all the upcoming AT&T Android devices coming out this year could be shipping with Yahoo from here on out. Ouch.

The Motorola BackFlip will be shipping on in just under a week, for on $99, which is a nice introductory price for their first Android device. That said, the BackFlip may not be for everyone, with its awkward flip-out keyboard that remains exposed when closed, and resistive touchscreen. The trackpad on the device, which is located behind the screen when it’s flipped open looks like it will have a bit of a learning curve, but should be easy enough to get used to.  The real story, however, is that AT&T just gave the finger to Google by going with Yahoo as their main search provider on their devices.

With only 18% of the mobile search market under their belt, Yahoo has ways to go before catching up to Google’s 61%. The new deal with AT&T could change that, and slowly start to shave off some share that Google has taken. Plus, with AT&T getting somewhere near five different Android devices this year, that should definitely get Yahoo’s share growing. Still, ‘Why?” is the question to be asked, but it really doesn’t matter. Google made an operating system that allows manufacturers and carrier to modify Android as they see fit. So, that’s what you get, Google.

The shift to Yahoo does not just stop with Android phones. No, this will be a change for all Media Net devices that the carrier sells, with the exception of the iPhone, which may be jumping off the Googleship at some point, too.

The Motorola BackFlip may not usher in a radical shift in Google’s mobile search marketshare, but when devices like the Sony Ericsson XPERIA X10, which is rumored to go to AT&T (or T-Mobile), begin to get into the hands of consumers, then we may see Yahoo’s share going up, up, up.