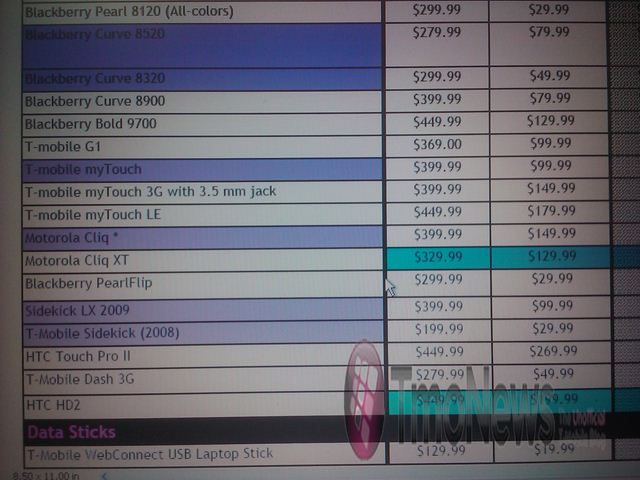 A flurry of T-Mobile-bound handsets have been priced by this screenshot of internal documents. What is most striking here is that the HTC HD2 is an altogether reasonable $199.99 on contract ($449.99 with no strings), which is a stark contrast to the $349.99 T-Mo was asking for the TouchPro2 at launch. That’s a great price for such a multimedia behemoth – check out our video, and you’ll see just what HTC can do with a 5 megapixel camera, 1 Ghz Snapdragon processor, and massive 4.3″ WVGA display. It’s just too bad that it’s not getting a Windows Phone 7 upgrade.

The Cliq XT (a.k.a. Quench) will be going for $149.99 on contract, $329.99 without. This Android bad boy was announced at Mobile World Congress, and we got to play with it – it’s a stylish, full-touchscreen slate with a 5 megapixel camera, 3.1″ OLED display, Android 1.5 with Motorola’s MotoBLUR custom user interface and service.

Finally, the Nokia Nuron 5230 XpressMusic was spotted earlier this month on its way to T-Mobile and is apparently coming March 17 for a scant $69.99 ($179.99 with no contract). The 5230 was announced over the summer and is expectedly modest, given the price point; it packs a 3.2″ display, 2 megapixel camera, S60 5th. edition, and has a variety of coloured backplates available. I presume at that pricetag, T-Mobile is taking a pass on Comes with Music.

Both the Cliq XT and the HD2 prices will be available without needing to resort to a rebate, so long as you get a data plan. Not bad at all. Anyone biting?

It looks like Android and RIM have really been clawing their way up in they smartphone market food chain. Both...