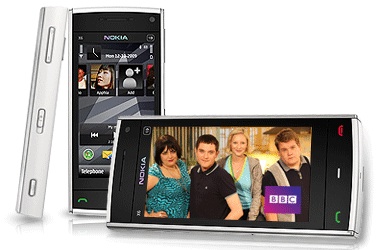 Previously I had reported that the Nokia X6 was available on 3UK – well guess what, now it’s available to buy from Vodafone UK! The Nokia X6 has a big, bright 3.2 inch touchscreen that’s great for games, browsing the web and videos – which is lucky really, since the third series of Gavin & Stacey is pre-loaded onto the handset exclusively for Vodafone UK customers.

The screen also displays great images taken with the X6’s 5MP camera – derived from that Carl Zeiss and the dual LED flash (perfect for those night time shots). And the Nokia X6 has a ‘built-in DJ’ too, which chooses the music based on your mood, from a massive 16GB of storage – that’s potentially up to 7000 songs – and the standard headphone socket means you can use your favourite pair of earphones.

Again, for VFUK subs, the device is pre-loaded with the Vodafone 360 Homescreen, giving customers access to Vodafone My Web, VIP contacts and the 360 Apps & Games Shop. On top of that, customers can access the Vodafone Music service to buy and download DRM-free tracks from a catalogue of more than 2 million songs.

The Nokia X6 is available for free on monthly contracts from £30 (24 month contract), with 600 minutes, unlimited texts and 500 MB of mobile internet. If you want to get hold of one, get it on by clicking here.

QiK Premium and Skype come to Nokia’s Ovi Store, which is getting 1.5 million downloads a day by the way

When it rains, it pours. Three big pieces of news relating to Nokia's Ovi Store his the net over the...