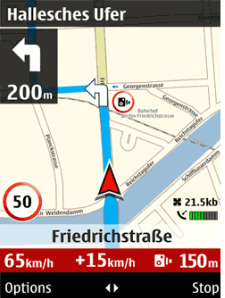 Nokia and Alpine are teaming up to bring the strengths of a smartphone to in-car systems.

The technology is dubbed “Terminal Mode” and it connects your Nokia handset with the car’s system via Bluetooth and USB. While many cars can connect to phones, this partnership should lead to deeper integration that can provide entertainment, be compatible with applications, and bring Ovi Maps to your vehicle.

Why would you want this? Well, Ovi Maps is pretty compelling alone because it’s about good enough to ditch your personal navigation device. The voice directions will come through your car’s speakers and the visuals will pop up on your car’s screen.

Car navigation is almost table stakes now, but what’s interesting about this deal is that it will let you use certain smartphone apps with your car. Things like weather, news or RSS apps will be on your car’s screen and you can continue with those as you leave the vehicle. There’s also going to be location-based services integrated and Alpine said this could lead to things like mobile coupons – a gas station could shoot out fuel discounts, for example. There’s no exact date for a release but look for it soon.

“The infotainment system of a modern car is a natural extension for the capabilities of smartphones,” said Vishal Chatrath, head of product development for Nokia automotive, in a written statement. “Not only will it simplify the use of turn-by-turn voice guidance from Ovi Maps, but also provide a new and easy way of accessing other content on the smartphone, such as music, and delivering automotive specific widgets from the Ovi Store.”

I actually saw a prototype of this a few months ago during some Nokia event and thought it looked okay. The demonstration worked well but the user interface wasn’t anything to write home about. What I really like is that Nokia said it is trying to build a standardized way for car systems to interact with smartphones, no matter the manufacturer. Throw in some rock-solid voice-recognition software and your car will soon become a cool mobile communications center.