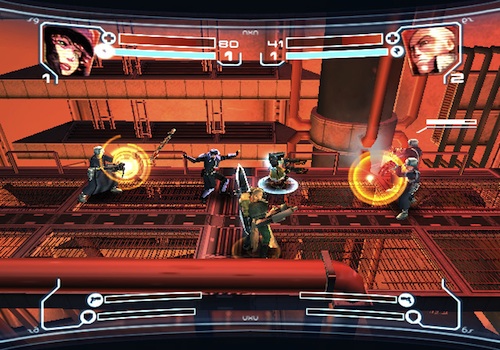 XS Games has announced the early Spring 2010 release of The Red Star for iPhone and PSPgo. Previously released on PlayStation2, The Red Star is a mashup of top down shooter and beat ‘em up gameplay, based upon the graphic novel of the same name by Christian Gossett.

“The Red Star is a proudly old school combination of classic action genres, much in the spirit of Contra and Streets of Rage,” said Steve Grossman, Chief Executive Officer of XS Games. “PSPgo and iPhone are the perfect platforms for this game in terms of controls, visuals, and price.”

The Red Star brings to life the dystopian United Republics of the Red Star (URRS), a mystical and technologically advanced alternate reality resembling Soviet Russia. In this alternate reality, the world has been wracked by vicious conflict between the world’s powerful nations, who use advanced technology to harness soldiers’ latent mental powers. Players can choose to play as one of the graphic novel’s three most prominent characters: Maya Antares, a powerful sorceress in search of her husband lost in battle, Kyuzo, Maya’s personal bodyguard as well as a powerful fighter, or Makita, a quick and agile warrior forced to abandon her life as a world-class athlete when her homeland was invaded.

Compared to PlayStation2, the iPhone and PSPgo versions offer fresh visual polish and improved controls.  The Red Star is the perfect “pick up and play” action game for when on the go. For more information, click here.

T-Mobile is launching its new International Pass for prepay customers from tomorrow, allowing customers to stay in touch with friends...