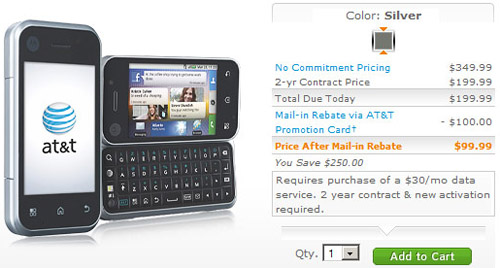 AT&T’s first-ever Android smartphone is, as expected, now available for purchase. The price is $99.99 after a mail-in rebate and with a two-year agreement.

As you know, this is just a beginning for AT&T. The carrier plans to launch 5 Android-powered devices during the first half of the year — including Dell Mini 3 and some HTC models (Desire?) — most probably during the upcoming CTIA Wireless in Las Vegas.

Back to the Backflip. As you know, it runs MOTO’s own MOBOBLUR UI on top of Android, allowing users to quickly connect with their buddies across social networks like Twitter and Facebook. The phone also comes equipped with a 5-megapixel camera, HSDPA and WiFi connectivity, GPS with compass, as well as a full QWERTY keyboard that makes typing on-the-go easier.

‘nough said. Hop over to this page on AT&T’s website and grab the damn thing… Or wait for another month for something even cooler. It’s your call. 😉

New GestureTek concept lets you interact with imaged prohjected from your device.

In one of the most intriguing videos I've seen in a while, GestureTek demos a possible glimpse into how we...