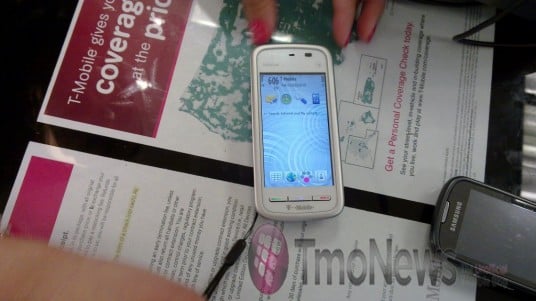 Nokia’s Nuron is already officially official and just waiting to go live on T-Mobile’s network on March 17th, and that means there are already plenty of pre-launch Nurons running around in the wild. Today, we have our first shots of the latest Nokia music-phone in the flesh, showing its T-Mobile branding and touchscreen. Those of you looking for a cheap alternative to the iPhone 3GS, or those of you that just have to have the latest music-oriented XpressMusic phone from Nokia, will want to pay attention.

The 5230 XpressMusic will hit the US as the Nokia Nuron. It will feature a 3.2-inch nHD touchscreen, 2-megapixel camera, 3G (HSPA_ connectivity, GPS, Bluetooth, memory card and a 3.5mm headphone jack. We’re looking for the Nuron to drop on March 17, with a $70 (on 2-year contract) pricing. The Nuron will also work with the free GPS navigation feature built into its Ovi Maps app, making it a great value for the directionally-challenged.

But, as Stefan pointed out, the iPhone 3G is going for $99 with a 2-year AT&T contract. The Nuron will be only $30 cheaper on contract. The choice will be yours.

Check out the rest of the Nuron live pics at TmoNews.

T-Mobile invites us to play with HTC HD2

We're already seeing the HTC HD2 in the wild and we'll be getting a much closer look at the handset...