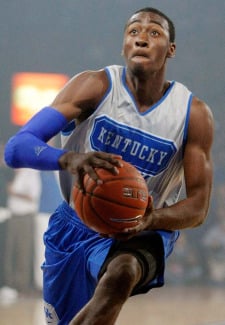 Don’t even worry about the “boss button” this year because you’ll be able to get your March Madness fix on your iPhone over WiFi and 3G.

Last year’s version could only stream over WiFi but AT&T is apparently confident enough in its network to let games stream over its data network. The $10 app will also include live radio broadcasts, push notifications of scores, social media integration, interactive brackets and a host of other statistics. The “Lite” version will be free and have video highlights and news and scores. A BlackBerry version is also expected, but it won’t have video.

“Last year, we were the first to do a live sporting event with the March Madness app, and since then the appetite for video and live video has grown massively for us … We one-upped ourselves,” Rob Gelick, the SVP and GM of CBS, told paidContent.

I haven’t been following college ball much this year, so I need IntoMobile readers to tell me what team is going to be cutting down the nets this year.

When Apple zaps applications from the App Store, many times the end users and developers are confused. But according to...