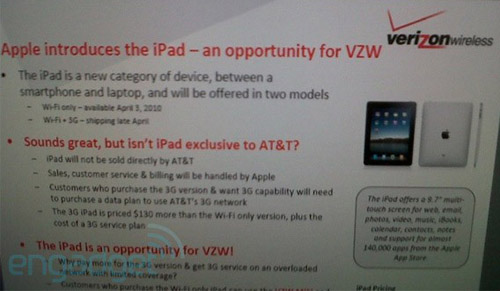 As you may know, the 3G-enabled version of the Apple iPad will be exclusive to AT&T. That, however, won’t stop Verizon Wireless to pursue iPad ownin’ users to sign up for their mobile broadband service. In other words, the Big Red wants to see iPad folks grabbing the MiFi and use it on “America’s largest and most reliable 3G network.”

And you know how MiFi works, right? Simply press a button and it instantly creates a hotspot which can be used for connecting WiFi-enabled devices such as… guess… the iPad.

The only problem I see is that Verizon’s 5GB plan costs $59.99, whereas AT&T offers unlimited data to iPad users for half of the amount.

So what Verizon wants? Rich folks who hate AT&T and their (let’s face it) limited coverage? Is that a plan to bet on? What do you think?

But before you drop two cents in the comments field below, let me remind you that AT&T thinks iPad will be mostly a WiFi affair…

Oakley and Nokia collaborated in Vancouver for a special limited edition Nokia N97 mini for Oakley sponsored Olympians. Only 200...