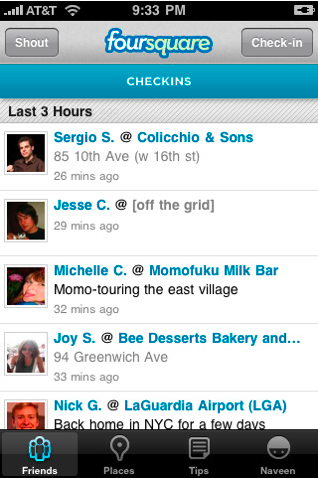 This weekend will see all manner of tech geeks converging on Austin, Texas for the annual South By Southwest (SXSW) Conference, and that can only mean on thing – socialized mobile “check-in” apps are going to be getting a lot of attention as the traditionally iPhone-heavy crowd rushes to try out new features. Foursquare, one of the most popular location-based social networking apps out there, has just launched an overhauled version of their iPhone app on the AppStore. With the new app in hand, SXSW attendees will be able to more easily boost their Foursquare street-cred.

The new Foursquare app sports a completely redesigned UI to commemorate the app’s return to SXSW, where it first debuted last year. With the redesign, Foursquare now supports a pull-down-to-refresh feature that should make it even easier to keep tabs on what your friends are doing in your area. In fact, the new user interface as a whole is easier to use and just feels more responsive. Case in point, sending out shouts and the check-in process is faster than before.

It should be interesting how the battle for the check-in apps plays out at SXSW. Foursquare also updated its BlackBerry app in order to cover its bases, but everyone knows that the “cool geek” party in Austin will be dominated by iPhones.

Foursquare is free to download and available now in the iPhone AppStore!

When it comes to fighting games, Street Fighter has always been the pinnacle series for both casual and hardcore gaming...