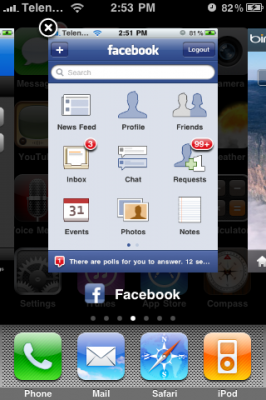 Apple will continue its streak of “magical” “innovation” established by cut and paste and MMS in iPhone OS 3.0 by offering multitasking capabilities in OS 4.0, according to tipsters. The feature of running more than one third-party application at a time has long been a thorn in iPhone’s side, although workarounds have been available through jailbreaking. That being said, the limitations certainly haven’t been technical, but rather about maintaining an optimal experience on battery life and stability fronts.

The specific implementation of multitasking in iPhone OS 4.0 hasn’t been made clear just yet, as it’s still all a work in progress, but it will apparently leverage an interface already bundled in the operating system – something like the browser’s cards/tabs could work nicely. Whenever multitasking actually arrives, it will plug yet another significant hole in the iPhone experience, and bring Apple up to par with some of the functionality other smartphone platforms have been enjoying for some time now. Background notifications in iPhone OS 3.0 was a half-satisfying stopgap, but true multitasking is a feature many iPhone users have been hurting for, and will be happy to see.

This weekend will see all manner of tech geeks converging on Austin, Texas for the annual South By Southwest (SXSW)...