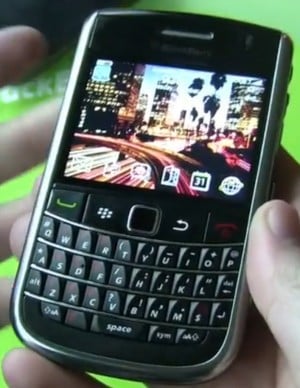 The last we heard about the BlackBerry 9650, its release on Verizon and Sprint were being delayed due to software problems, and it was being renamed from the Tour2 to the Bold, but today, we’re hearing murmurs that the Verizon version will be launched sometime in May. For those with the original Tour, there’s news for you too: OS 5.0 will be out in two to three weeks, enabling a $5/month push-to-talk service, along with all of the other goodies you’ve been waiting for.

The BlackBerry 9650, which has long been code-named the Essex, will pack a 3.2 megapixel camera, 256 MB of memory, GPS, Wi-Fi, and an HVGA display. The touchpad will give the device a more modern feel, and the inclusion of Wi-Fi address a definite gap in the original Tour that we reviewed. An updated Tour has been a long time coming, and has been officially confirmed since last July, but has taken its sweet time coming out of the pipe. Historically, carriers have been pretty picky about their BlackBerry handheld software, be it over security, stability, or other issues.

As for PTT on the 9630, it will be over Verizon’s data network, so likely won’t be able to match Sprint’s iDEN-enabled 8350i as far as performance goes, but will at least offer a slightly slicker packaging.

Time for a quick BlackBerry OS leak. To start off the weekend, Tour 9630 owners can now get their hands...