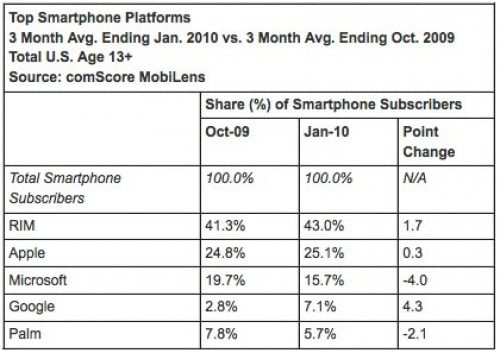 Comscore released their Mobile OS market share for October to January. Windows Mobile was the biggest loser, and Android seemed to pick up  almost everything  it lost. RIM and Apple also both saw gains.

RIM is still the leader in the OS space, holding 43% of the total market in the U.S. The iPhone gained 0.3%, giving them 25.1% of the market. It may not be too much of a gain, but the iPhone is still growing, and with the next generation device coming around 3 months or so (as history has shown), Apple may soon see much more growth.

Palm– Oh, poor Palm saw a decrease in market share from 7.8% to 5.7%, a 2.1 % loss. Palm’s really got it’s work cut out for them if they ever want to see some growth this year. At the Game Developer Conference (GDC), Palm announced the introduction to 3d gaming on WebOS, which definitely can perk up a couple of ears, but will it be enough? With increased competition coming from the various Android phones being released, Windows Phone 7, and  of course, Apple’s refresh of their phone, Palm should have gotten the first WebOS phones right. That, unfortunately has not been the case to any degree.

Where Microsoft saw the loss of 4.3%, Android happily lapped up what they left behind with an increase of 4.3%. There is little doubt what device is still fueling Android’s fire, the Motorola Droid. Where the Nexus One would probably be the king of the crop – and someways it is – limiting the adoption of the device by making it only available online looks like it is hindering it more than anything. Hopefully the Nexus Two will bring more attention to Google’s online store, but I wouldn’t expect to make the strides in market share that the Motorola Droid has accomplished.

2010 is definitely the year of Mobile, and possibly the year of Android. Although that was supposed to be last year, wasn’t it?  It looks like the winners in the mobile space this year will be Apple, and Android, and hopefully Windows Phone 7 impresses. Lets hope this competition doesn’t slow down, lawsuits aside.

GuidePoint Systems, the company that is known as a GPS-based telematic service provider to vehicle owners and fleet managers, has...