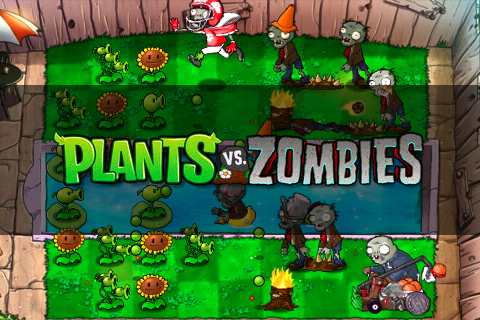 Tower defense games have been all the rage for the past couple of years.  There’s something about setting up towers to defend against wave after wave of increasingly difficult enemies that can be very satisfying.  But what happens when you take a tried and true gameplay type and have it developed by a video game developer that is known for making some of the most addictively simple games ever?  You have yet another game that will eat hours away from your life.

Plants vs Zombies is a tower defense game where you fend off your home from wave after wave of zombies by using their obvious adversaries: plants.  As you progress through the game, the zombies become increasingly difficult, but your arsenal of plants improves as you dig up new varieties of foliage after each mission.  In order to plop down your plants, you’ll need to harness the power of the sun… literally.  Sun droplets will come down every so often from the sky, but you can also plant down sunflowers, which will spit out sun droplets as well.  Micromanaging your sun expenses becomes fun as you decide which plants to put down in what location, all while zombies are trying to get into your home.  Be mindful where you place your plants as when zombies come into contact with them, they’ll eat them and proceed down their sluggish path of destruction. 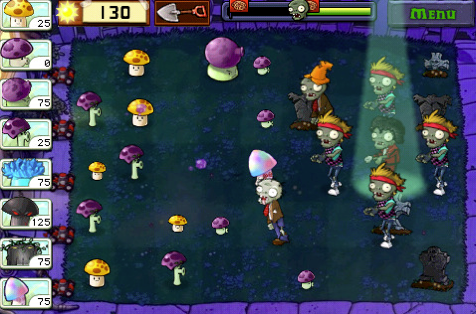 I’ve been fighting zombies for a good portion of my adult life, and as mindless as they seem, the zombies in Plants vs Zombies are a smart bunch.  The zombies will don various pieces of armor, better mobilize themselves with zambonis, or even imitate the king of pop to try and get into your home.  The game starts off with zombies invading your front lawn, but your zombie slaying services will be required at other points of your home as zombies launch their attacks all around your home. Each level has its own challenges to deal with, such as the night level where you aren’t given sun droplets from the Sun, or the roof where you need to put down a pot of dirt in order to plant anything, and this diversity in levels certainly keeps the game fresh throughout the entire zombie slaying campaign. 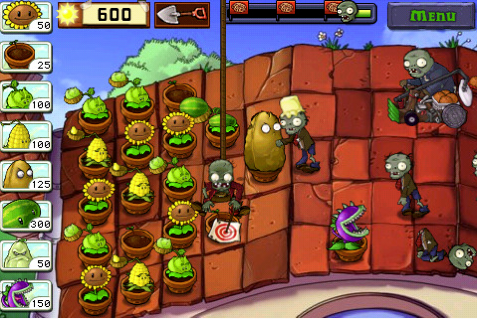 PopCap Games impressed me by how well they brought the desktop experience of Plants vs Zombies onto the iPhone, and made it feel so natural.  The desktop interface translates well on the iPhone as putting down your plants and collecting sun droplets feels second nature.  The sights and sounds of the desktop version are all here, from the unique art style of both the plants & zombies, down to the sound of Crazy Dave’s ramblings.  The game performs well on an iPhone 3G, except for when a large number of zombies are on screen.  During these times, the overall gameplay performance slows down, but not to the point of being unplayable.  When you consider how much is going on at these times, the hit in performance can be overlooked. 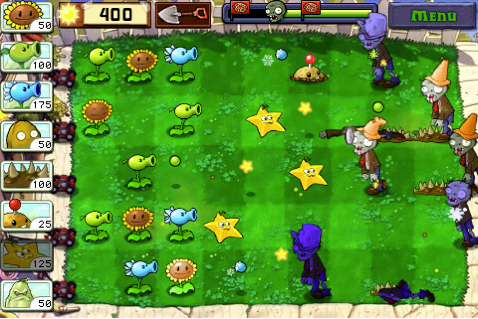 FINAL THOUGHT: PopCap Games has successfully adapted one of its most popular games from the PC/Mac to the iPhone.  Not many games can offer as nearly an identical experience as Plants vs Zombies can on the iPhone.  The only unfortunate downside is the hit in performance when playing on an iPhone 3G.  Even saying that, I still cannot praise Plants vs Zombies enough.  If you own an iPhone, you must own this game.

Rumor: Tony Hawk’s Pro Skater Coming to an iPhone, iPod Touch and iPad Near You?

Mike over at Redmond Pie made a little post the other day, one that iPhone gamers will want to take...