In a recent analyst call, Google Engineering Vice President Vic Gundotra said that Google searches via mobile have gone up 5x over the past 2 years, and that the company really believes that one day ad rates for mobile will surpass those of ad rates on PC. 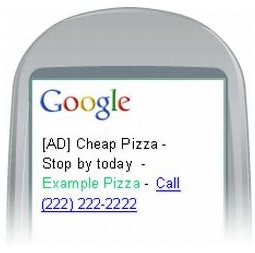 Vic’s right, of course, since mobile ads will be able to utilize the location sensor inside a mobile phone to show highly relevant information, but the real reason is that mobile screens are simply smaller. We, as internet addicts, have learned to ignore the top 200 pixels, and right hand side bar, because we know it’s usually loaded with complete and utter bullshit. How does this bullshit pay my salary is beyond me, but it magically does, so I have to at least partially respect it.

On mobile, when even the highest resolution devices today are “only” 800 x 480 pixels, that ad is going to take a nice chunk of your screen. You’re more likely to notice it, and more importantly for Google, you’re more likely to accidentally press an advertisement. I’ve done this on numerous occasions on my Nexus One.

Anyway, let’s all keep on going about our days, sucking the mighty Google [expletive deleted], because we all know it’s good for us in the end.

The Palm Pixi was showing an unfamiliar version of its Facebook application in a SF Weekly ad recently, hinting that...