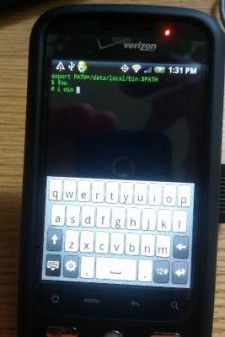 This was going to happen at some point, the Droid Eris has been rooted! Unlike many of the rooted Android phones, the Eris already has a ROM ready for installation that we’d written about a couple weeks back. So, Eris users, if you’re tired of waiting for Verizon’s supposed update, then sit back, read through the instructions and get your # (root) on!

Where did this come from? Well XDA, of course! Keep in mind, rooting your device voids your warranty. Rooting is usually for those brave enough to possibly kill/brick your device. If you’re willing, or just plain don’t care, than this guide is for you! You can always stop by the thread over at XDA for step by step instructions if you’d rather read than follow the video instructions, and possibly say, ‘Hey, Dev, thanks!.”

For those of you who aren’t ready to root their device, all you have to do is wait till Mid-April, supposedly. Last time Verizon sent out a OTA update to the Eris, some people had their whole devices wiped. Now, that probably will not happen when the official 2.1 rollout starts, and you most definitely have to wipe your entire device if you do root, too.

With both my MyTouch, Hero, and Nexus One, I’d rooted them all within the first week of having them, and have no complaints. Then again, i know what to expect, buying the G1 when it was first available for preorder, and then rooting it in a very long, tricky way. Rooting has come a long way, I tell you! Besides the damn official unlocking of the Nexus One bootloader, can’t undo that one.. yet. Their are both pros and cons to rooting, and for the most part, ROMs available to rooted devices are pretty bleeding-edge. With the exception of the Sense ROM for the Nexus One, rooted ROMs can be somewhat unreliable, but it doesn’t take long for the fellas over at XDA to whip up something awesome. The choice is yours. Have fun #ing!

Credible reports are swirling that Sprint will unveil its first 4G smartphone at next week's CTIA conference. Will we finally...