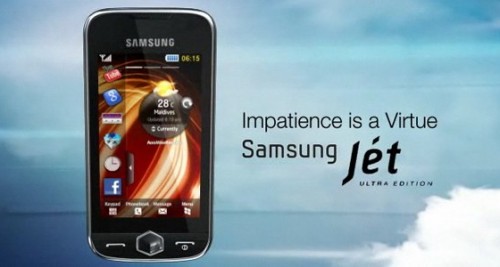 It wasn’t too long since Samsung announced the Jet 2, which looked exactly like the original. Well, Samsung’s at it again, as they just recently announced the Jet Ultra edition. What makes it so Ultra, you ask? Not a lot. The Jet Ultra edition is the exact same phone that’s been available for Vodafone for some time now, give or take like, two features. Oh, you barely remember the original Jet either? It’s ok, we don’t blame you.

So here’s a refresher course on the Jet (and Ultra edition). It packs a 3.1-inch  (800×480 resolution)  inch AMOLED display for great picture and color saturation quality. Another nifty feature of AMOLED? It’s rendered almost unreadable in direct sunlight. My biggest gripe about the Nexus One. Other features of the Jet include and 800 Mhz processor, TouchWiz 2.0, with that adorable, love it or hate it 3D cube interface for your media. DVD like video playback and recording, as well as a 5-megapixel camera with smile detection software, and a dual LED flash.

Accompanied by a WiFi receiver, FM radio, microSD card slot expandable to 16 gigs, and Java games, you’ve got a pretty decent mid-ranged smartphone. Specs don’t necessarily read like a dream, but still not much to complain about either. So, is it enough to actually want to have in your pocket everyday? For some, sure. But in a world of iPhones, Nexus One’s, and Palm Pre Pluses, this may not the one to run out for.

The one difference that’s been pointed out with the Jet Ultra edition is that it has the BBC iPlayer added to it. Whoo-hoo? The Samsung Jet Ultra edition is also black with a sort of silver band on the front of it. Way to keep up with innovation Samsung, this is a real hook, line, and sinker you’ve brought to the public. Sorry Samsung, please do everyone a favor a lethally inject TouchWiz.

Living and working in Canada as I do, I try to pay particular attention to Canadian mobile news... you know,...