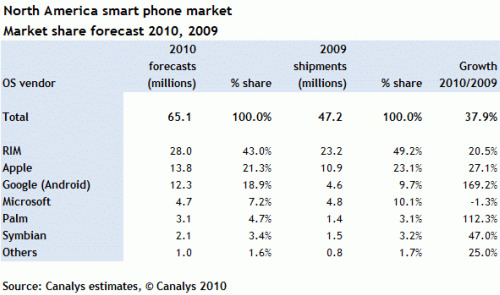 The U.S. smartphone market was dominated by Research In Motion in 2009, but Apple and Android are nipping at its heels, according to new data released from Canalys.

The research firm said there were 47.2 million units shipped in 2009, which is a 27% increase from the year before. Thanks to more high-profile devices and the mainstream appeal of applications, the number of smartphones shipped in 2010 is expected to grow to 65.1 million next year. RIM has the enterprise space locked down and this is a major factor its 43% market share. The BlackBerry maker is expected to lose market share next year but it will ship a larger volume thanks to the growth of the larger overall smartphone market. Apple will also lose some market share, but the next-generation iPhone is sure to sell boatloads.

As a Droid owner, I was very interested to hear what Canalys thought about Android’s chances, and the research firm said Google’s operating system will see the strongest growth of all smartphone platforms in 2010. With bad ass devices like the Nexus One on all four carriers, Android is expected to ship 12.3 million units next year, a healthy 169% jump from the 4.7 million units shipped in 2009.

“Many vendors are looking to use Android and other platforms to lower the cost of smartphones, and open up the market to new customers on tighter budgets, who previously could not have afforded to buy a smartphone,” said Tim Shepher, Canalys analyst, in a prepared statement. “The demand is clearly there – more and more consumers want to browse the Internet on their phones, download third-party applications to enhance and personalize their devices, and engage with mobile services such as social networking, e-mail and navigation. A smartphone is an excellent vehicle for that.”

As for Windows Phone 7 Series, Canalys said the waiting time between the announcement and release will really hurt Microsoft’s sales in 2010. I completely agree with this because it’s difficult to rationalize buying a Windows Mobile smartphone now – even if its the HD2 beast – when a much cooler version is only a few months away.

If you're not quite feeling the graphite-colored HTC Desire that has been making the rounds for the past few months,...