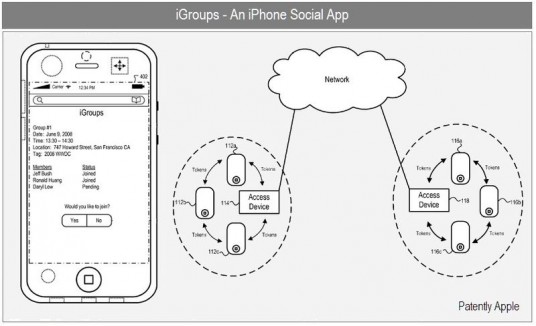 Location-based social networks are all the rage these days. Any mobile app worth its salt has some sort of tie-in with geo-location data. Apple may soon be jumping into the social networking waters themselves. A new patent application hints at Apple’s plans for a new type of location aware social network that gives groups of friends and co-workers the ability to stay connected when they’re at concerts, tradeshows or just their own neighborhood. Apple is calling it “iGroups” and they’ve got some interesting ideas for how to allow iPhone users to keep in touch with each other.

The patent, filed today with the USPTO, describes an iPhone app called “iGroups” that lets groups of people communicate privately with one another. The way it would work is that any iPhone user with the app installed would go around swapping specially encrypted “tokens” to let the network know that a particular pair of people should be connected and allowed to send messages and exchange contact information. The idea is to give people a chance to take their in-person meeting to the next level by essentially adding each other to their respective social networks without having to go through the actions of sending a “friend request” or other type of “invite.”

There’s also a location-aware aspect to the iGroups app. The tokens would allow members of a group to track the location of other devices in the group. All that location data could then be used to view group members’ position on a map and shared with other members of the trusted group. In the event that a device in the group doesn’t have access to GPS location services, Apple proposes the use of some sort of “virtual GPS” technology. There’s mention of using “anchor” devices that could be used to triangulate the position of devices in the group.

There’s a problem, though. The iPhone AppStore is already home to an “iGroup” app made by not-Apple. If Apple wants to bring this idea to market, they’re going to have to figure out how to deal with the already available app.

This patent doesn’t necessarily mean Apple will ever launch a social network. But, given the iPhone maker’s recent penchant for social networking apps, it’s looking darn likely that Apple wants to give Foursquare, Gowalla, and even Facebook a run for their money.