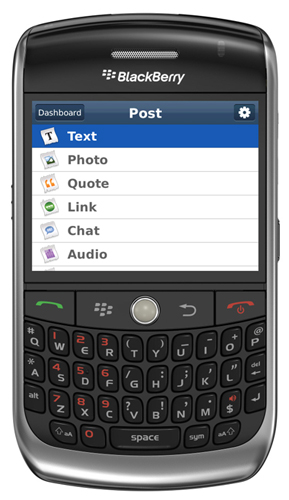 Although a bit behind their iPhone app released in February of ’09, Tumblr has released their blogging software on BlackBerry. Not too long ago, Tumblr released some data regarding where picture uploads were coming from, and among the smartphones, BlackBerry was second only to the iPhone (and even then, by a narrow margin), and that was without having a dedicated app. Anyone who’s serious about writing will appreciate a physical keyboard, so I could see the BlackBerry proportion of Tumblrererers growing significantly with this client in hand.

Tumblr for BlackBerry does just about everything you’d expect it to do – you can post text, pictures and videos from the BlackBerry’s camera, audio from the mic, links from the browser, set tags, publishing dates, categories, draft posts, you name it.

Although we use WordPress here at IntoMobile, Tumblr strikes me as a great platform for a personal blog where you just want to quickly share a few items and not much else. Tumblr’s wonderfully simple and nicely-suited for posting items from mobile, and has a few conventions that are unique to the network. For example, there’s a “reblog” button that allows you to quickly post content you like without going through the whole rigamarole of copying and pasting, kind of like Twitter’s retweeting function. Tumblr also has a dedicated “like” system, if you don’t feel like figuring out how to integrate Twitter retweet, Facebook sharing, Google Buzz or Digg counters in some sensible way.

Interested? You can download Tumblr for BlackBerry free here, from your device. You can always learn a bit more about why Tumblr’s just so danged snazzy over here.