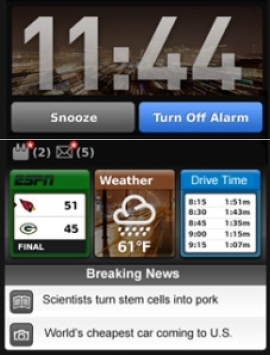 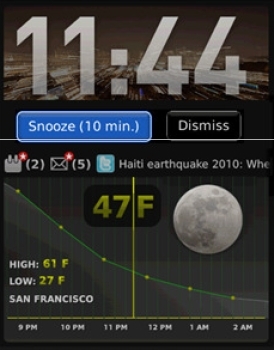 The last screenshot we saw of the supposed BlackBerry operating system 6.0 was little more than a mock-up for developers, but this pair of screenshots look like something a little jmore concrete and work-in-progress – just look at how that Snooze button is overlapping the divider in a distinctly beta, non-photoshopped way. From what I’m hearing, it’s a misnomer to think of this as OS 6.0, but rather a new widget system for BlackBerry (and no, not those widgets, although I’m sure they would work in here) that will be available on older models, like the 9700, as well.

According to the source of these screenshots, they’ll likely be on the BlackBerry slider code-named Talladega we’ve been seeing so much of lately and a refreshed Bold (the 9700a is a model number has been floating around). Right now, it’s still hard to tell if the Talladega is the BlackBerry 9700a, or if it will take on some other crazy designation, like the 9900, and the 9700a will be something else entirely, but however the naming scheme works out, this is what the slider is supposedly going to look like.

What do you guys think of this is a potential launching point for BlackBerry OS 6.0 and potentially refreshing 5.0? Enough to get RIM caught up to the UI Android and iPhone, or at least a good start?