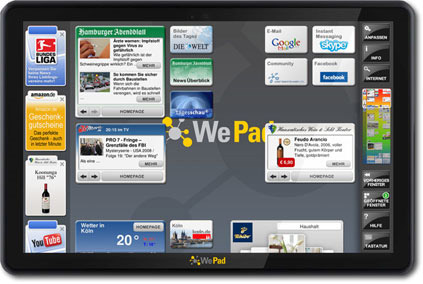 Another product is joining the tablet wars. It’s WePad, which comes from the German company Neofonie. Specs wise, we’re talking about the device that’s more powerful than the Apple iPad, but as you know, it’s not the specs that win the consumers’ hearts, minds and ultimately wallets.

In addition to powerful specs, the good thing is that Neofonie has its own publishing platform called WeMagazine, which they use to make newspapers and magazines readable on computers and smartphones. The plan is to use this technology on WePad in a move that will make them compete not only with the iPad, but with the Amazon Kindle as well. In that sense, they are reportedly in talks with Germany’s biggest publisher – Springer, though we don’t have that confirmed.

Availability wise, the WePad should be available in April, and will most likely hit the German market prior to iPad. We’ve no idea when it will be available outside Germany — I’m presuming that in addition to finalizing the hardware production, Neofonie also wants to have some publishers on board prior to launching the device elsewhere. We’ll see where that goes, and in the meantime – you can get additional details from WePad’s official website.