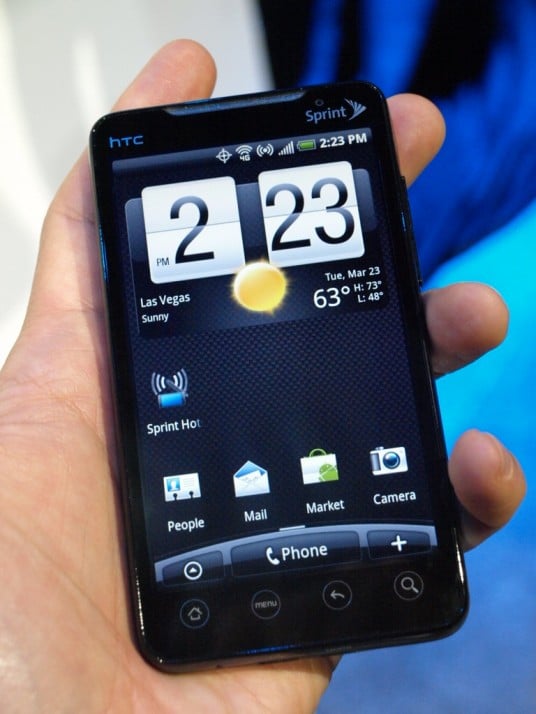 Sprint just unveiled the HTC EVO 4G as the first 4G (WiMAX) Android phone to hit the US scene, and you know what that means. Yup! It’s time to put our dirty mitts all over the latest media-monster from HTC. The HTC EVO 4G was previously known to us as the “Supersonic,” but Sprint apparently went with a model name that reflected its 4G roots. It may look a lot like the Windows Mobile 6.5-powered HTC HD2, but the EVO 4G leap-frogs the HD2 in almost every way.

First, it’s powered by Android 2.1 OS with the HTC Sense UI, boasts the ginormous 4.3-inch capacitive touchscreen display, 8-megapixel primary camera with a secondary 1.3-megapixel video conferencing camera, 1 Ghz Snapdragon processor, HDMI-out, GPS, and Wi-Fi. Then, add in the fact that it works with Sprint’s 4G WiMAX data network and can serve as a WiFi hotspot for up to 8 other WiFi devices, and it’s clear that the EVO 4G is the next step in Android evolution.

The HTC EVO 4G feels comfortable in the hand. Despite its huge display and 8-megapixel camera, the Android phone sits just right in your palm. The huge display makes media consumption a dream come true, and the 4G WiMAX connection is fast enough to stream high-quality YouTube content from the web – the EVO 4G actually works with the new YouTube HQ (High-Quality) service, so say good-bye to pixels and jitter. And, with the HDMI-out port, the EVO 4G can actually stream HD videos (side-loaded or downloaded directly) from the handset to a TV.

The Sense-ified UI is easy to use and sports the new “Leap” feature that allows you to instantly switch between homescreen panes with an exploded-panel view that’s triggered by a multi-touch pinch gesture. The keyboard is classic HTC, so you’ll be thanking your lucky stars that you don’t have to deal with Google’s standard Android keyboard. And, again, the huge display and kickstand make for a truly rewarding movie viewing experience.

Overall, the HTC EVO 4G will quite possibly be the baddest Android phone on the planet, when it launches on Sprint later this year. That’s fitting, seeing as how the 1Ghz Snapdragon processor and 4.3-inch touchscreen made the HD2 the gotta-have Windows Mobile device of the year.

iPhone and iPod touch get the djay Remote App

algoriddim has today announced the release of djay Remote, an app that turns a user’s iPhone or iPod touch into...