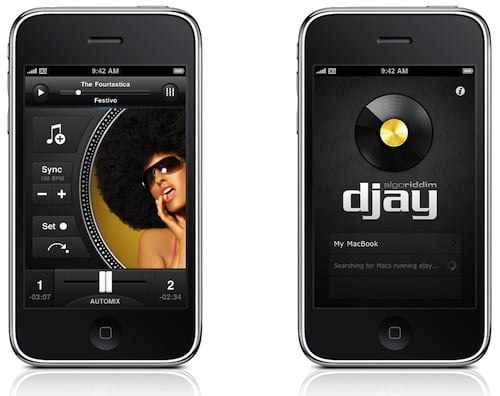 algoriddim has today announced the release of djay Remote, an app that turns a user’s iPhone or iPod touch into a fully-fledged DJ controller. Wirelessly syncing with algoriddim’s djay software on the Mac, djay Remote enables users to mix and play their iTunes music, whether they’re mingling with guests or mixing it up on the dance floor.

For those of you that haven’t come across the djay software yet (why not? I’ve covered it before!), it is a simply awesome application – so the opportunity to run it over your iPhone is definitely something you should think about if you are a wannabe/current/has-been DJ!

djay’s unique features can now be controlled from the palm of the user’s hand via a WiFi connection and an absolutely addictive iPhone interface that lets one literally touch and move their music.  djay Remote completely changes the dynamic for DJs at any level – from the party host who can now socialize and mix from her iTunes library at the same time, to the club pro that wants to move from the front of the house and into the audience without missing a beat.

Using ultra-low latency networking technology, djay Remote seamlessly integrates with djay over WiFi and is synchronous 2-ways, so that any changes made on djay are automatically updated live on djay Remote, and vice versa.  The remarkably realistic control that sets djay apart from similar software is carried over to djay Remote, including the ability to run Automix on a selection of songs, work two turntables individually, scratch and cue music in real-time and control high quality effects, looping, skipping and cue points – all from the iPhone and iPod Touch’s unique and popular touch screen. The tactile interface of the touch screen perfectly dovetails with the hands-on capabilities of djay Remote to enable users to recreate the feel of a real turntable DJ setup and take their creativity on-the-go.

djay Remote is available for $4.99/£2.99 from the Apple app store. djay 3 for Mac (version 3.1 or later), is available as a free trial from the djay web site, is required to run djay Remote. For more information on djay or djay Remote, go here.

Sprint has announced the LG Remarq at CTIA Wireless, their second eco-friendly phone after the Reclaim. The LG Remarq is...