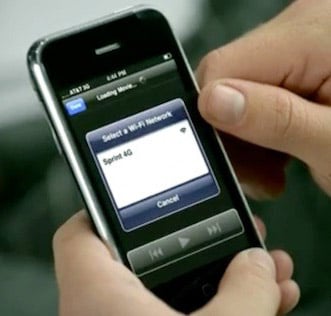 Sprint is running a new ad for its MiFi-like device – Overdrive 3G/4G Hotspot mobile router, which as you may know allows users to turn their cellular connection into a WiFi hotspot.

The ad features an iPhone user called (guess) Steve and his Overdrive-ownin’ friend Matt, who turns on his Sprint device to make a super fast hotspot for his iBuddy.

Matt says: “My friend Steve’s iPhone is cool, but it’s limited to AT&T’s 3G speeds. So I’m going to use the Overdrive 4G mobile hotspot to make it up to ten times faster…”

At the end of the ad, Matt asks: “What can you do with 4G?” and then the narrator concludes with: “Whatever you do, do it up to ten times faster than 3G with 4G from Sprint.”

The next obvious step is to target iPad users — something Verizon is reportedly trying to do with its MiFi offering. Sprint has a more compelling offering, so if the Big Red can do it, Sprint should take that route, too.

Even though iPad is still not available, that doesn't stop developers from working on apps. Being the first is what...