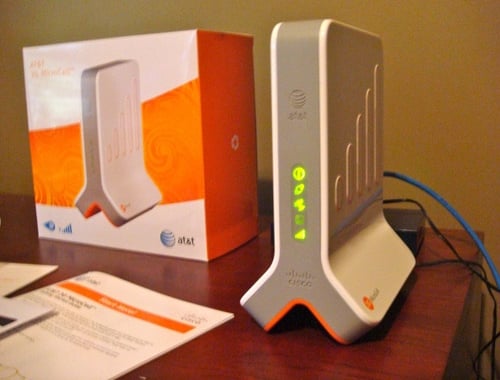 Will is running into a meeting right now with AT&T to talk about their first femtocell, dubbed “Microcell”, which has been in trials for well over a year, and how it’s finally being made available to AT&T customers nationwide. That means I get to write up the press release. Oh joy!

The concept of a femtocell is quite easy to understand. AT&T gives you a box that you plug into your home broadband connection, said box acts like a mini cell tower, your phone connects to said cell tower, and bada-boom, you got yourself improved reception! This will prove absolutely essential to iPhone owners living in New York or San Francisco and worrying about whether or not they’ve missed a phone call or SMS, but the hacker in me is thinking about something a bit more deceptive.

Why not take the Microcell with you while traveling abroad, and then plug it into the broadband connection in your hotel room so you avoid roaming charges? Think about that for a moment.

The Microcell will cost $150 and you’ll be paying for your minutes like you usually do, or you can sign up for a $20/month plan that gives you unlimited minutes for calls made through the Microcell, plus $100 off the unit itself, meaning you only have to spend $50 to walk out of the store with cheap calls. That $20/month package works for both individual customers, and families who are on one of AT&T’s family plans.

Now at this point you’re expecting me to shit on AT&T, that they should be giving these things to their customers for free, but I’m not going down that route. The business plan is solid, and while yes, AT&T should work harder to provide coverage in more places, you can’t really complain about free calls. For it to be perfect for me it would have to also include unlimited texting, but I know that SMS is an operator’s bread and butter and you just can’t mess with that.

Additional facts: The Microcell was made in conjunction with Cisco, it can connect to only 10 mobile phones, which you’re allowed to specify, and of those 10 you can only use 4 at a time.