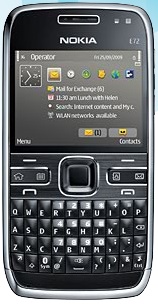 Check it out! The power of the crowd comes in once again, as 3UK decide to reverse their decision not to range the Nokia E72, and instead bring it on to the network for a May 2010 timeframe! Apparently 3UK were getting so many comments on their blog, that it convinced them it was the right thing to do.

I’ve had a Nokia E72 to play with recently, and I have to say I am torn between two different sides of the device. On the one hand, the hardware is a lesson in design excellence, and shows that Nokia have still got it, certainly as far as industrial design goes. However, the software is that tired OS called Series60, and I’m afraid these days it just doesn’t have the visual polish to compete with other smartphones out there. That said, the OS/UI is functional, and get the job done, which is what you want from a business device.

At any rate, check out the Nokia E72 on the 3UK network from May onwards.

Nokia buys yet another company you’ve never heard of, and said company’s website is down

Nokia just bought Novarra, who according to the press release is a privately owned company of over 100 people based...