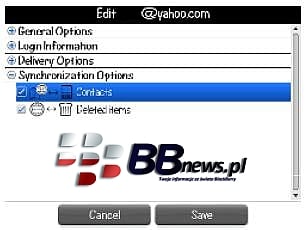 Shortly after a successful North American rollout of BlackBerry Internet Service 3.0 with OpenOffice support this weekend, we’re already seeing the first signs of BIS 3.1 by way of this device screenshot. Contact sync with Yahoo! is the only thing we can confirm from this shot, but Hotmail should work too, and earlier rumours say that Google Calendar syncing will also be built in to BIS 3.1 (rather than done through the third-party Google Sync app). The device-side e-mail setup webpage also has a bit of a facelift. We’re still waiting on two-way GMail sync through the Enhanced GMail plug-in, which will hopefully arrive before 3.1 does.

Verizon opens up its own appstore, V CAST Apps

With all of the application stores opening up, seemingly everywhere, is there more room for another? Verizon seems to think...